Superforecasting: The Art and Science of Prediction 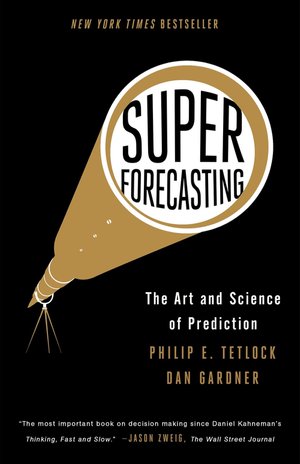 Did you know it's possible to make accurate predictions about the future without psychic powers? Given the right practice and strategies to explore, you can become what's known as a super forecaster.

In Superforecasting: The Art and Science of Prediction by Wharton professor Philip E. Tetlock and co-author Dan Gardner, readers learn about the qualities and skills that make a super forecaster and how you can apply the knowledge to any situation. You will also learn about real-life super forecasters from all walks of life and how to break down even the most difficult questions to achieve the best results.

What does it take to be a good superforecaster?

Celebrity forecasters like Tom Friedman are called upon in times of crisis to help make long term decisions based on current events. You don't have to be a celebrity to make accurate predictions, however, and many "super forecasters" with high accuracy rates are unsung. Forecasting is a skill to be learned and continually mastered.

To be a reliable and confident forecaster, you'll need to be open to new experiences. It's not enough to be open-minded; you must be super open-minded to sacrifice your own preconceived ideas and opinions for the sake of the most accurate prediction.

Unfortunately, no magic formula exists that forecasters can turn to – just broad principles with a lot of caveats. However, there are a number of tried-and-true methods of forecasting that can help you on your journey.

When posed with a big question, triage the situation. That is, focus on questions where your hard work is likely to pay off, as opposed to the hardest or the easiest questions. Go for the "Goldilocks" approach, i.e. somewhere in the middle and work your way outward.

If you were to sum up forecasting in one word, it might be "balance." This doesn't mean that your predictions should always be somewhere in the middle but take everything into consideration even if it contrasts with your current view. A closer inspection might introduce a factor you hadn't thought of that alters the course of your probabilities.

Italian American physicist Enrico Fermi, a central figure in the invention of the atomic bomb, posed a brainteaser for forecasting that asks how many piano tuners are in Chicago.

Without looking at the internet or Yellow Pages, a forecaster can come up with an educated answer if they know four things:

Fermi taught that breaking down the question can separate the knowable and unknowable from this list. Despite the seemingly random nature of the answers, the result tends to be more accurate than a random guess. Many have attempted this puzzle, but one presentation by psychologist Daniel Levitin shows how to come up with a solution.

Therefore, if 50,000 pianos need tuning once per year, and it takes two hours to tune one piano, that comes out to 100,000 total piano-tuning hours. If you divide that by the annual hours worked by one piano tuner, it comes out to 62.5 piano tuners in Chicago. Levitin found 83 listings for piano tuners in Chicago, but many of them were duplicates, such as businesses with more than one phone number. So, an accurate number is not known, but Levitin's calculation shows how close you can get.

Pose a question. For example, let's say you're a homicide detective and you need to find out who did it. Unlike on TV, the clues will not fall in your lap before the next commercial break.

Psychologists who test police officers find a large gap between their confidence and their skill. As officers become more experienced, that gap grows. Beware of growing confident faster than you grow accurate.

Update often, but bit by bit

Statisticians will be familiar with a thought experiment proposed in the 1700s by Presbyterian minister, Thomas Bayes. He wrote "An Essay Towards Solving a Problem in the Doctrine of Chances," which was refined and published posthumously in 1761 by his friend, Richard Price.

Essentially, the theorem says that your new belief should depend on your prior belief, multiplied by the diagnostic value of the new information.

While super forecasters should be numerate, they don't have to turn to algebra every time they want to make a prediction. What matters more is Bayes' core insight of getting closer to the truth gradually by updating in proportion to the weight of the evidence.

Going back to the homicide example, you might increase the likelihood of one subject being your killer once you find out they lied about their whereabouts. If you overreact and think, "Ah ha! I'm 99% sure now" you can overlook unknowns, such as the reasons why they lied (to save their job, to save their spouse's feelings, etc.).

Don't forget to factor in situations that could change everything overnight. It's better to give yourself a bit of wriggle room "just in case" than assume everything will go as planned.

In 2010, a poor Tunisian fruit vendor was robbed by corrupt police officers ̶ sadly, a common occurrence at the time. Later that day, he set himself on fire outside the town office. Protests erupted. The dictator of Tunisia, President Zine el-Abidine Ben Ali fled the country. Still, the civil unrest continued throughout the Arab world and resulted in a number of rebellions and civil wars. Who could have predicted that one man's self-emollition would cause the "Arab Spring?

A situation might be identified as a "powder keg ready to explode," but it's nearly impossible to tell what will light the fuse.

American meteorologist Edward Lorenz discovered that tiny data entry variations in computer simulated weather patterns could produce dramatically different long-term forecasts. His insight, published in an article called, "Predictability: Does the Flap of a Butterfly's Wings in Brazil Set Off a Tornado in Texas?" became the inspiration for chaos theory.

How predictable something is will depend on what we want to predict, how far into the future, and under what circumstances. Tomorrow's weather forecast is going to be much more accurate than one five days from now because as Lorenz discovered, a lot can change between now and then.

The internet is full of forecasts. A quick visit to Amazon illustrates the algorithm's prediction of other items you might like to buy. When you provide feedback on recommendations, the algorithm updates its predictions ever so slightly.

Life is full of mundane predictions, too. You see clouds on the horizon and grab an umbrella. Scientific laws like phases of the moon can predict the weather with enough accuracy to plan agriculture. But, it's much harder to forecast when you should fill up your gas tank this week because the pipeline might get attacked by hackers and drives the prices up.

To err (and assume) is human

A now famous "Cognitive Reflection Test" was introduced by Shane Frederick, a management science professor at the Massachusetts Institute of Technology. It poses this seemingly easy question:

"A bat and ball cost $1.10. The bat costs one dollar more than the ball. How much does the ball cost?"

Most people immediately think, $0.10. If you think about it more carefully, you find that this answer is incorrect. Our brains automatically latch on to the "dollar" and not the "more." If the ball costs $0.10 and the bat costs a dollar more ($1.10), then the total cost will be $1.20. Therefore, the correct answer is $0.05.

Modern psychologists attribute this phenomenon to a division of human brain function into two systems. System One is the subconscious. It makes automatic cognitive and perceptual decisions, and very quickly at that. System Two is our conscious mind, or whatever we choose to focus on at the moment. System One makes split second decisions based on historical experience, existing knowledge, predispositions, and other factors that "feel" right but are not necessarily correct.

To be a super forecaster, you will need to be aware of System One and how its vital operations can sometimes hinder the judgement of intelligent people.

The importance of human predictions

As imperfect and bias as humans can be, they will still be a necessary component of forecasting in the future. The advent of super computers and artificial intelligence makes it tempting to assume we can leave all the predictions up to machines. Polymath Herbert Simon predicted in 1965 that we were only 20 years away from a world in which machines could do "any work a man can do."

While this is certainly the case in many automated industries, there is a reason that computers and robots are still overseen by humans. The authors spoke to Watson's chief engineer, David Ferrucci, who has worked in artificial intelligence for over 30 years. Computers are better able to spot patterns these days, he noted, but machine learning requires the presence of humans to feed the learning process. As of right now, a computer can look up a fact, but a forecast requires an informed guess based on a myriad of information.

The human brain is wonderous because the task of compiling data and making a prediction is extremely difficult, and yet we do it all the time. The biggest hurdle for computers if they are to ever replace a super forecaster is understanding. Humans may get better at mimicking human meaning and therefore better at predicting human behavior, noted Ferrucci, but "there is a difference between mimicking and reflecting meaning and originating meaning."